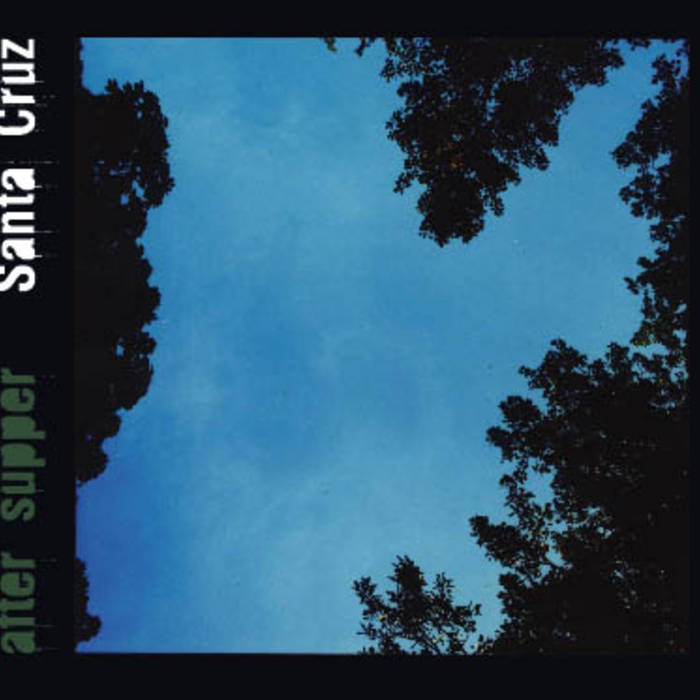 Grandaddy rides a Sparklehorse called Lambchop. Belgium seems an unlikely country to export this brand of red-eyed electro-Americana but Santa Cruz have obviously been taking notes on artists like Mark Linkous and Kurt Wagner and, in their debut ‘After Supper’ they prove themselves worthy disciples of those ingenious multi-instrumentalists. Less techno-inebriated than Grandaddy but more accessible than, say, Sparklehorse, they flaunt a host of influences from Flaming Lips to My Morning Jacket to Lambchop. The ghosts of these bands are all there, parading shamelessly before you, but something curiously ‘other’ is also lurking in the mix and it is that extra ingredient that makes this album memorable. The deliciously dreary piano ballad, ‘After Supper’ opens proceedings with a reflective gloominess that remains a motif throughout. How someone called Pierre-Vital Gerard can sound so naturally American mystifies me but his vocals never sound in the least bit affected. Despite the tenebrous lyrics (a sad machine/on repeat/plays your dreams/on the beat) ‘Flowers for My Friends’ is every bit the summery singalong single, a flicker of sunshine in an otherwise charcoal sky. Riffing away on his proudly described ‘little cheap electric guitar’ , P-V steers the song into Teenage Fanclub Territory with a rising chorus shimmering with harmonies. Electronica noodles away in the background but, as on all the other tracks, the computer stuff is subtle and artfully restrained. Bruno Green, sounding like a continental Kurt Wagner, takes over on the darker tracks like ‘Clank of Gear’ and, notably, ‘Dead For Sleep’ a string-heavy mini-symphony about a dying body seeping blood into the earth. Apart from the occasional frivolous moment, this is a dark and serious album without any of the irony or wry humour their American cousins use to such effect. Hardly a failing but perhaps indicative of something intrinsically European. In what seems to be slightly forced eccentricity, the song ‘Sad Ugly Boy’ is a triumvirate in parts 1, 2 and 4. (What’s the story on Part 3?) Performed as fragments and scattered through the album, ‘Sad Ugly Boy’ could be a Neil Young primer (though not, I hope, the inspiration of the song); Part one has the acoustic innocence of Harvest, part two the denser, wiser Harvest Moon and, in part 4, the thrashy riffing of Live Rust. The closing track, 'Falling at Least’ is the longest at over 7 minutes and neatly encapsulates what Santa Cruz does best; spare acoustic guitar over washes of synthesizers, fragile half-spoken vocals riding over bursts of electronica, power chords trembling away, drums rolling and breaking like a crashing tide. This is a pretty hot debut and, again, a strong example of how European bands assimilate and reinvent what used to be a purely American sound.

Special guests :
Laetitia Sheriff on "After Supper "
Isa Valenti on "Where were you?"
Bikini Machine on "Flowers for my friends"

Bandcamp Daily  your guide to the world of Bandcamp